Currently viewing the tag: "I Treasure ME Facial & Body Mists"

By Dafina On 1 August 2013 · Add Comment
“Take the choicest spices, of pure myrrh 500 shekels, of sweet cinnamon half so much, of sweet calamus…, of cassia, of olive oil…, and you shall sanctify them and they shall become most holy; whatsoever touches them shall be holy.” Exodus 30:23-29 In ancient days, aromatherapy was used to cleanse the body, soothe the spirit [...]

“Take the choicest spices, of pure myrrh 500 shekels, of sweet cinnamon half so much, of sweet calamus…, of cassia, of olive oil…, and you shall sanctify them and they shall become most holy; whatsoever touches them shall be holy.” Exodus 30:23-29 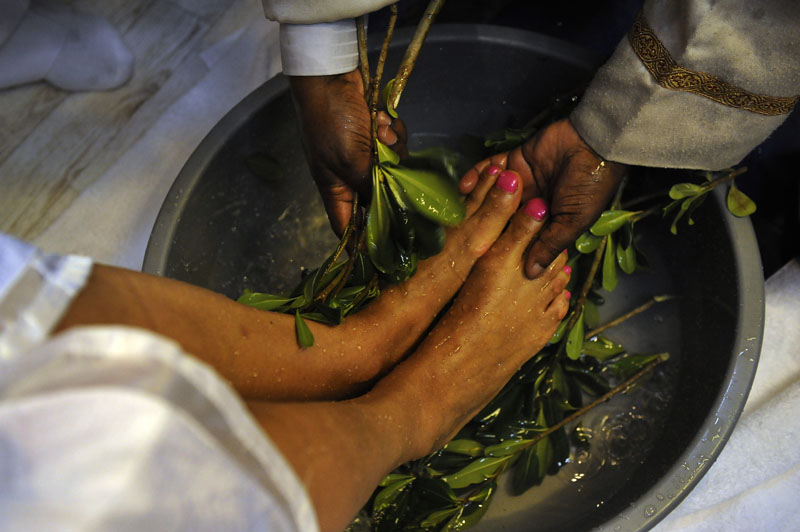 In ancient days, aromatherapy was used to cleanse the body, soothe the spirit and reawaken the soul. Frankincense and myrrh were considered sacred oils used in the temples in ancient Kemet (Egypt). The priest/priestesses had sophisticated knowledge of the properties (i.e., antiseptic, antiviral, antibacterial, aphrodisiac) of the aromatic oils. They used them to preserve their dead, as in the case of King Tut, whose mummy was still intact centuries later. Contained in his tomb were the oils of frankincense, myrrh and spikenard, and they had all retained their fragrances!

During the plagues of Europe, it was the perfumers who survived because of the antiviral properties of the oils they used in their walking sticks that eventually made its way into their bloodstreams. Receptor sites were already filled up when the viruses tried to latch on. It was estimated that only 1 out of 3 people struck with the bubonic plague lived.

In 1937, French chemist, Rene-Maurice Gattefosse badly burned his hands while experimenting in his laboratory. He quickly dipped his hands into a vat of lavender essence because it was the closest thing he could go to for relief. Not only did the lavender cause the pain to decease, it also prevented the occurrence of scarring. Thus, began the re-introduction of the science of plant essences which Monsieur Gattefosse termed “aromatherapie,”  thus originating the term. This “miraculous” experience also spurred his desire to investigate the healing The actual term “aromatherapy” first originated in 1937 when French chemist Rene-Maurice Gattefosse invented the word after a burn incident spurred his curiosity about the healing power of essential oils.

With this brief, yet fascinating history in mind, please take the time to adventure into the fragrant world of aromatherapy. The essential oils are also used for  a wide variety of health concerns. They can ease headaches, calm menstrual cramps, ease stomach aches, soothe the nerves, uplift the spirits,  and aid sleep and breathing, all while creating a calm, relaxing environment. These are just a treasured few of the functions associated with the essential oils I use when creating I Treasure ME Aromatherapy products.

The olfactory sense is linked to the part of the brain that deals with the emotions. This is why you feel so much better after using them. Our smells create memories. With the essential oils, you can anoint your body, mind and spirit while keeping your environment blessed with holy fragrances. Our focus on sacredness is the key to our healing. As they say, “ain’t nuthin’ wrong with a lil spice.”

Visit I Treasure ME Product Page where you have the choice of three lusciously fragrant floral mists created with essential oils in a distilled water base. These alluring and intoxicating mists are designed to enliven your mind, calm your spirit and satisfy your soul. Spray frequently and enjoy the effects. More fragrances are being created, so stay tuned.

While the essential oil face and body mists, as air fresheners, to calm environments, like your office, or a conference room before and after meetings, to calm an agitated child… They have a multitude of uses. Discover yours and ENJOY!